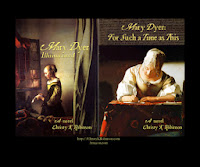 My guest today is Christy K. Robinson, author of the 2013 historical novel, Mary Dyer Illuminated, its forthcoming sequel Mary Dyer: For Such a Time as This, and the non-fiction The Dyers of London, Boston, and Newport.

I hold a great deal of enthusiasm for both Christy and her books about Mary Dyer, not only because they encompass the life and times of Herodias Long, but also because Mary Dyer Illuminated is a superb read, and Christy is a superb friend. And now, without further ado, here’s Christy!

Thank you, Jo Ann, for hosting this interview on your website. Your readers should know that through our research into Herodias Long and Mary Dyer, Jo Ann and I became acquainted in Facebook, and then close friends who shared research, after which personal details bonded us together. When Jo Ann took a road trip, we got to spend some hours together in my home. We’re even cousins, going back to late-17th century New Englanders.

JB: Your history is impeccable. When did you begin research for your book?
CR: I did a lot of genealogy research on my family lines when I was a teenager, driving my mom to the LDS genealogical library about 30 miles across the city. These were printed books and microfilms, long before the Internet came to town! She discovered that she and I were direct descendants of Mary Barrett Dyer, whom I’d never heard of.

We both believed the stuff you read now on the Wiki and genealogy pages, which were copied from the Quaker historians: that Mary Dyer was hanged (the word is hanged, not hung) “for the crime of being a Quaker.” But as you’ll see in my research blog, two novels, nonfiction book, Facebook pages, etc., that is NOT the case. It wasn’t a crime to “be” a Quaker, and no one died for it. Mary and three men deliberately chose to die in civil disobedience, though they had several clear opportunities to just leave Massachusetts Bay Colony.

I was commissioned to write and photograph a women-in-ministry convention in New England during leaf-peeping time in October 1997.  As we traveled by coach, a history professor lectured on the Quaker women who were persecuted in the area, and that Hutchinson and Dyer had memorial statues “on Boston Common.” (Actually, they face the Common.) When I learned I’d be stuck at Logan Airport for hours before my plane would board, I jumped into a taxi for a ride to the Common for a personal quest. I was not wearing proper shoes for city walking, cobblestones, or the half-run I made through the park, peering at every monument. Finally, I found Mary, and took several photos before taking another taxi back to the airport. I went home, consulted my files, and counted up the “greats” behind “grandmother”: nine greats. Twelve generations.


The philosophical and theological bits have been a lifelong interest, and while doing some hobby genealogy study on Mary Dyer in about 2006, I ran up against terms I didn’t understand. So I started reading about Anne Hutchinson and antinomian beliefs, and then early Quaker beliefs. It was a revelation to learn that my own church was rooted deeply in New England’s Puritan ways (not in doctrines, necessarily, but in the “corporate culture” of the believers). In 2010, I decided to write a novel about both Mary and William Dyer, and the research began with scores of books and hundreds of internet searches.

JB: How much is known of William Dyer and Mary Barrett’s early lives? Do you know where they were born?
CR: Very little is known of their early lives. There’s a christening record for William in September 1609 that lists his father’s name, but not his mother’s. Mary was born about 1610-11, probably in or near London. There are snippets of rumors that say she was in attendance at the court of Charles I, but no proof. The first real record of Mary is her wedding to William on September 27, 1633, at St. Martin-in-the-Fields church.

JB: You write about Mary Dyer’s life as if you know her. How much is actually known of Mary’s early life?
CR: I think I do know her! But not because of any family stories, legends, or mystical experiences. As I explained above, what little I knew was wrong. But I so thoroughly researched her culture, religious beliefs, friends and enemies, surroundings, what took place later in her life, etc., that I could place her in situations and then project what probably happened based on what the people around her did and said.

As for what is actually known about Mary, I learned that many of the things I thought were established fact, were written by Quaker historians who had an agenda, which was not to write factual details or investigative journalism. Their agenda was to promote their beliefs and persuade others to support or at least tolerate their practices. In essence, they were public relations and communications managers for their new sect. I recognized that because it’s what I did for years, for two universities and a nonprofit organization!

JB: John and Margaret Dyer were real people. Why did you choose them for Mary’s guardians?
CR: I saw John’s name in a tax record on Johan Winsser’s trustworthy research website. John’s poor-roll tax was substantial, so they had some money. Then I went hunting for, and found, his childless wife that he married rather late in life. They lived in the right place and had a name that would fit my novel plotting.

I also decided that with major plague epidemics regularly raging in London, and killing tens of thousands of residents at a time, Mary Barrett and William Dyer and his master must have had an escape hatch. And since Mary would be a mistress of garden and farm servants in just a few years, she would have to learn practical economics. So I needed people who lived out in the country but had ties in the city. I created the Stansbys, in the real village of Willesden.

JB: I remember being told in school that the Puritans came here for religious freedom. You write that they hid their religious intent behind stated plans to make investors rich.
CR: Yes, they were a corporation designed to make money in development and export of New England’s natural resources of timber, shipbuilding, furs, food production, fishing, and other commercial pursuits, plus all the support industries to make a viable, flourishing community. Really, who could blame them, when they had to sell their homes, farms, animals, and businesses in England that were being heavily taxed? They were imprisoned by the king’s men for their dissent and refusal to conform to religion or government. Some of them had to flee their homeland in secrecy to avoid imprisonment. So often, incarceration itself caused death.

Of course, religious freedom meant that they were free from Anglican rule, but they held themselves to a far more strict code. In London, John Winthrop worked as a magistrate in wills and estate trusts, but his refusal to take the usual bribes and deal dishonorably as his colleagues did made him stand out, and he had to resign and try to melt into his Essex manor until the fleet could depart from England. They seemed very moderate when they were in England, but when they got to Massachusetts, they were religious extremists. John Endecott, in particular, was a proto-Taliban! They truly intended to build a New Jerusalem that would hasten the second coming of Christ.

You might be surprised to learn that I wrote John Winthrop, a man who became a principal enemy of Hutchinson and Dyer, as a sympathetic character in his private life.  But I could never get into Endecott’s head or find a sympathetic trait. I had other characters describe him.

JB: The Puritans took the royal charter for Massachusetts with them. What does that signify?
CR: The charter should have been kept in London with every other official document. With the king’s seal on it, they acted as if in his name and authority. But they always intended to form their own theocratic government with minimal oversight from the king they considered pro-Catholic and politically repressive. King Charles demanded the return of the charter numerous times, but Winthrop ignored the orders. When an envoy tried to come over and take it back, his ship seemed to disintegrate under him like some X-Files scene. Winthrop gloried in that, saying that God had miraculously protected them.

JB:  We think of Puritans all dressed in black and white. However, your women wear rainbow colors.
CR: Black clothes were only for the very rich because they were expensive to dye and maintain without fading in the sun or the washing.  The few portraits from New England at that time were done of the elite members of society who were wearing their best duds at the sittings: black. I read lots of blogs on fashions, including Plimoth Plantation’s, and studied paintings of the 17th century, to see what men and women wore. Guess what: not that many ball gowns! I also chased down what Englishwomen wore to their weddings, and they were not wearing white until Queen Victoria, two centuries later.

JB:  Was there really a lunar eclipse on the night of Anne Hutchinson’s miscarriage? New Englanders’ hair must have been standing on end at the sight of the blood moon.
CR: There really was a blood-red lunar eclipse on June 25, 1638, and it was observed on Aquidneck Island—by our people! The blood moon was, to them, a sign of the Apocalypse. But no one knows the date of Anne’s miscarriage. I timed out the reports of it in July, and I knew how long a molar pregnancy can last (about 12 weeks), and that there was no report of it on June 1, when the huge earthquake hit, so for dramatic purposes and Anne’s labor, I chose the lunar eclipse near the end of June—which would be 12 weeks after Anne was released from house arrest and had a celebratory conjugal reunion with her husband!

That’s one of the things that distinguishes my books from what’s come before and has been so heavily reliant on the Quaker writers. I used real events, internet research into science and medicine and astronomy, and a timeline!  The timeline opened my eyes to all kinds of surprises, and blew me away many times, as Jo Ann and my sister-in-law can attest. You’ll have to see the “signs and wonders” that begin in Mary Dyer Illuminated and come with even more importance in the second volume, Mary Dyer: For Such a Time as This (to be released in December 2013).  There’s also a Kindle-only companion book to the two novels, full of research into the culture and fascinating factoids I’ve found. That one is called The Dyers of London, Boston, & Newport.