On the night of February’s full moon, Richard and I went for a ranger-led walk at the Everglades National Park in Florida.  Our group strolled along the Anhinga Trail boardwalk, and though we are in the heart of winter, we heard a dozen different insects chirping and buzzing.  Anhingas and herons croaked gutturally, complaining about our disturbance – or was it a night-prowling predator?
Predators abound in the Everglades, most of them nocturnal.  The region’s few panthers and bears are rarely seen.  Raccoons and smaller scavengers are also rarer than they used to be, thanks to one of the park’s newest predators – the Burmese Python.  These monsters arrived in the park as unwanted or escaped pets, and are now a permanent part of Florida’s ecosystem.  They grow up to 30’ long, and will eat anything they can swallow.
Pythons’ numbers are estimated at 10,000 – 100,000, which means that nobody really knows how many of these voracious snakes are in southern Florida.  (Ironically, the pythons are endangered in Burma)  Also, nobody knows how far north they will eventually range – South Carolina?  Virginia?  What the specialists do know is that deer, herons, small mammals, and even alligators are on the pythons’ menu.

The coolest thing Richard and I learned is that alligators’ eyes reflect light, glowing red when we aim our flashlight at them.  These reptiles lounge at the top of the Everglades food chain, and will eat anything they can swallow (including pythons).  They are a keystone species for the region, because much of the Everglades’ wildlife can’t survive without alligators.  They dig holes which retain water through the driest months, providing that precious commodity for fish, birds, turtles, and all types of animals.  If a few of those animals feed the owner of the gator hole, then that’s how the food chain works. 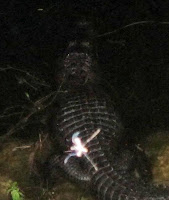 This photo shows the most feared critter in the Everglades.  No, I’m not talking about the big lizard – check the enlargement.   Caught in my camera’s flash is the park’s most dreaded predator  – the mosquito.  They aren’t so bad in the winter – there are only a half dozen of them in my photo – but when the wet season arrives, I will not be standing here.
There are 43 species of mosquito in southern Florida.  They hatch in salt or fresh water, and in 13 of those species, females bite people for a blood meal to perpetuate their species.  Florida’s sprawling coastal cities depend on two things to make them habitable – air-conditioning and insecticide.
I submit to you that mosquitoes are also keystone species for the Everglades.  How much of the park would still exist without them?  A few choice hardwood hammocks, perhaps the most inaccessible marshes, but humans have already dug, diked, and drained ¾ of the Everglades.  Perhaps the only thing that stops the rest of that beautiful, austere ecosystem from being turned into farmland or housing tract is the humble mosquito in its uncountable trillions.
Thank you, Madame Mosquito, for saving the Everglades from development.  Thank you, dry season, for knocking down the bloodsuckers’ numbers to tolerable levels so we humans can visit this incredible place.  Now, let me out of here before the rains begin, and the Everglades’ true rulers take to the air – the mosquitos.
Here is a full story and images of the python problem: http://www.usatoday.com/tech/science/environment/story/2012-01-30/pythons-florida-everglades/52893342/1
Posted by Jo Ann Butler at 7:55 AM No comments:

Dancing With Vultures and Tickling Crabs

TV shows such as “Miami Vice” give us the impression that southern Florida is nothing but an urban jungle.  There is more than enough development and cityscape, but Richard and I love SoFL for its untamed lands.  Winter is by far the best time to see Florida’s wild beauty, and we are making the most of it.
Western forests and deserts are untamed enough to satisfy most people, but southern Florida dishes out the wild like no place else.  Under the best of circumstances Florida's wetlands are hard to access.  Many parks have boardwalks to access their tangled mangrove swamps.  I know a few tough people who have walked through mangroves, but let’s just say that they had compelling reasons to do so.  I haven’t tried it yet.

You need a boat to see much of the Everglades and mangrove swamps, and even a sturdy craft doesn’t make it easy.  Canoeing the Everglades’ sawgrass prairie is delightful as long as you don’t run out of water – a concern during Florida’s dry season.   It also pays to keep an eye on the tide.
Southern Florida’s wildlife is simply incredible.  There are many great places to see critters, but the Everglades is king of them all.  The early ‘Glades had few dry places, but there is now a single road which gives access to the park.
Just about everything in SoFL - roads, buildings - lies upon heaped up coral rock, and the ditches and holes which supplied that rock are now filled with water.  Those ditches are now waterways teeming with animals which are so accustomed to people in the Everglades park that you can watch them go about their lives only a few feet away.  Some people get far too close.   Winter’s dry weather concentrates birds, fish, turtles, and alligators in areas with water, so Anhinga Trail and Shark Valley are world class animal-watching spots. 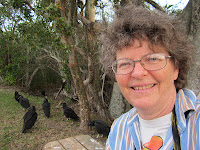 Black vultures are prominent at Anhinga Trail.  They have a peculiar habit of dismantling parked vehicles, especially windshield wipers.  One could say that vultures really do enjoy a good tailgate party, and removal of weatherstripping is their version of Pin the Tail on the Donkey.  The park provides tarps to people who want to protect their vehicles at Anhinga Trail.  At more remote locations we wrap the wipers with plastic bags, hoping the fluttering will scare the vultures off.  Limited success there - they are they are picking the caulk from our camper.
I am a long-time birder, and have added butterflies to my search-and-identify mania.  Florida has butterflies like no other place, and this year there is a bumper crop.  It is much safer to get close to butterflies than alligators, and I am making the most of it.  This friendly fellow is called The Monk. 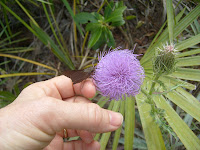 Butterflies aren’t the only things I’ve picked up over the years – sea hares, non-poisonous snakes – anything that lets me get close enough.  I added a new critter to my portfolio a few days ago when I learned how to entice a tree crab.  Slide my hand up the crab’s mangrove perch from below gently enough, and I can persuade it to transfer to my fingers.  There, it daintily picks at my skin with tiny claws unless I get the camera too close.  That giant eye is a threat, and the crab launches itself into space, down to the safety of the mangroves and mud. 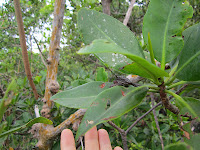 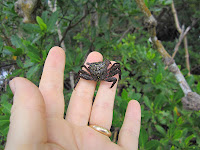 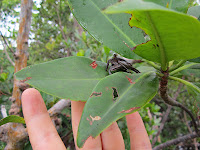