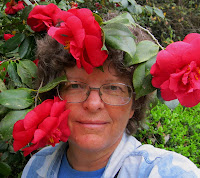 For now, I am called upon to answer questions about my next big thing - the sequel to my B.R.A.G. Medallion winner, Rebel Puritan.

What is your working title of your book?
The Reputed Wife is the sequel to Rebel Puritan, the first book in my A Scandalous Life series about Herodias Long.  Both phrases come from 1665 Rhode Island court documents regarding Herodias’ divorce request after twenty years of pretended marriage.  She was referred to as George Gardner’s ‘reputed wife’ and they were admonished not to ‘lead soe scandalose a life.’

Where did the idea come from for the book?
I wrote Rebel Puritan years after finding my 8th-great grandmother Herodias Long in my genealogy.  She is notorious for her marital escapades, of which we modern folk would take no notice.  However, Herodias was whipped in Boston for protesting even harsher sentences carried out against the Quakers, and that makes her a heroine in my eyes.  The Reputed Wife is about that episode, Herodias’ messy relationship with George Gardner, and struggles between New England’s Puritans and their liberal neighbors in Rhode Island.

Which actors would you choose to play your characters in a movie rendition?
I describe my series as “Scarlett O’Hara meets The Scarlet Letter.” Naturally, Herodias Long will be played by Scarlett Johansson.  Herod’s first husband, John Hicks, should be played by Colin Firth as in “Shakespeare in Love,” though he has to lose the pearl earring.  George Gardner, Herod’s second husband must be Harrison Ford in “Witness.” Ooh, la la!  Herod’s third husband was John Porter, who was old enough to be her father.  Sean Connery has proven that older men can be deliciously sexy.

What is the one-sentence synopsis of your book?
I'm going to take two sentences to ask, How far would you go to defend religious freedom?  Herodias Gardner walked sixty miles to protest the abuse of Quakers, only to face Boston’s whipping post herself.

Will your book be self-published or represented by an agency?
Like Rebel Puritan, I will self-publish The Reputed Wife through my Neverest Press.

How long did it take you to write the first draft of your manuscript?
Eighteen months.  I’m in the final tweak phase, and will send the mss to the printer in January.

What other books would you compare this story to within your genre?
Anya Seton’s The Winthrop Woman is by far the best example.  Ms. Seton’s works are a delicious blend of fiction, history and biography, and my love of them inspired me to try writing my own historical novel.

Who or what inspired you to write this book?
Herodias Long and her bold, scandalous life, of course.  When I read entries about Herod in Rhode Island’s court records, I wondered why nobody had written about her.  I wrote Rebel Puritan as the book I wanted to read.  The Reputed Wife continues Herod’s story.

What else about your book might pique the reader’s interest?
Accused witches weren’t the only innocent persons hanged by Puritans, and some horrific acts are contained in Reputed Wife as the Puritans sought to preserve their religious and political purity.  Hanging witches weren't their only method, but some of their highly controversial acts have been forgotten.  By the way, I searched Rhode Island's records for witchcraft incidents, but there are none.  Zero!  The Rhode Islanders were outcasts from Puritan colonies, and that made them much more sensible than their Puritan neighbors.

Include the link of who tagged you and this explanation for the people you have tagged.
I thank Karen Aminadra for tagging me, and for now I have tagged Ellen Marie Wiseman.  I'm on the prowl for others to tag, and I hope that you all had a Happy Thanksgiving!

Karen is the author of Charlotte: Pride and Prejudice Continues, Life and Loves, and Relative Deceit, which is hot off the presses!
http://kaminadra.blogspot.co.uk/

Ellen Marie Wiseman is also the author of a hot-off-the-presses book, The Plum Tree.  I've read this Holocaust story, and heartily recommend it.  She will post her answers on December 17th.
http://www.bookpregnant.blogspot.com/

Rules of the Next Big Thing
***Use this format for your post
***Answer the ten questions about your current WIP (work in progress)
***Tag five other writers/bloggers and add their links so we can hop over and meet them.

Ten Interview Questions for the Next Big Thing:
What is your working title of your book?
Where did the idea come from for the book?
What genre does your book fall under?
Which actors would you choose to play your characters in a movie rendition?
What is the one-sentence synopsis of your book?
Will your book be self-published or represented by an agency?
How long did it take you to write the first draft of your manuscript?
What other books would you compare this story to within your genre?
Who or what inspired you to write this book?
What else about your book might pique the reader’s interest?
Include the link of who tagged you and this explanation for the people you have tagged.
Be sure to line up your five people in advance.

My good friend Christy English has just launched her latest novel, HOW TO TAME A WILLFUL WIFE.  Christy is the author of two excellent novels about Eleanor of Aquitaine.  She has now turned her talent to introducing one of Shakespeare's wildest women into the unsuspecting world of Regency England.

Today it is my great pleasure to let Christy share her thoughts about our favorite strong-willed women, and why we all love them so.  Take it away, Christy!

Strong Women in Fiction: Reflections of Ourselves
Christy English
Author of HOW TO TAME A WILLFUL WIFE


I have always been fascinated by strong women in literature. Since I was in seventh grade and first read Gone with the Wind, and watched as Scarlett O’Hara destroyed and rebuilt her world time and time again, I have been obsessed with strong characters as they reflect my own strength back to me.

Of course, it took many years before I realized that these women drew me in because they were an exploration of my own strength and weaknesses. Anytime an author picks up her pen, she explores herself, her own world and her view of it. My fascination with strength in women in my own writing began with Eleanor of Aquitaine, one of the most powerful women in Western European history. She ruled vast territories in her own right, and added to those territories with each marriage, first to the King of France, and later to the King of England.
She did not hesitate to leave her first husband when he would not give her a son, and she went on to rule a vast empire at the side of Henry II, while giving him eight living children, seven of whom survived to adulthood. Though her alliance with her second husband fell apart as had her alliance with her first, she went on to rule as Regent for her favorite son, Richard the Lionhearted while he was on Crusade. Eleanor of Aquitaine has held a place in my imagination since I first read about her, reminding me of what it means to be dedicated to a goal, and to work toward it even as it changes beneath you, never relinquishing the final outcome, only letting go of the present obstacles until they can be overcome.
Herodias in REBEL PURITAN is much like Eleanor in this regard. She is touted as Scarlett O’Hara meets THE SCARLETT LETTER, and that is true. Though she is a woman of her time, she does not allow herself to give up and give in when obstacles rise in her path. She does not hesitate to defend herself or her children, leaving an abusive husband at a time when women simply did not do this.

Now, in my latest novel, HOW TO TAME A WILLFUL WIFE, I find myself in the joyous world of Regency England, exploring the strength of my latest character, Caroline Montague. Another strong woman, she rides a war stallion, fights with a knife and a rapier, and shoots a bow and arrow not just for formal target practice, but hunting from horseback. When her father returns from the Napoleonic wars to arrange her marriage, she finds that the man she is called on out of duty to marry has never known a woman like her. Raised in the wilds of Yorkshire and taught to fight by her father’s veterans, Caroline does not resemble the staid, demure women of the south where Anthony Carrington hails from.

Between them begins a battle of wits and wills as they vie for supremacy. Who will be tamed in the end? My intention was to write a novel in which the male and female leads work out their differences and learn, step by step, moment by moment, to face each other as equals. I can’t speak for Scarlett or Herodias, or even for Eleanor of Aquitaine, but Caroline and Anthony discover that equality in a romantic relationship is a goal worth seeking.

Anthony Carrington, Earl of Ravensbrook, expects a biddable bride. A man of fiery passion tempted by the rigors of war into steely self-control, he demands obedience from his troops and his future wife. Regardless of how fetching she looks in breeches.

Promised to the Earl of Plump Pockets by her impoverished father, Caroline Montague is no simpering miss. She rides a war stallion named Hercules, fights with a blade, and can best most men with both bow and rifle. She finds Anthony autocratic, domineering, and...ridiculously handsome.
It's a duel of wit and wills in this charming retelling of THE TAMING OF THE SHREW. But the question is...who's taming whom?


After years of acting in Shakespeare's plays, Christy English is excited to bring the Bard to Regency England in her romantic re-telling of The Taming of the Shrew, HOW TO TAME A WILLFUL WIFE. When she isn't acting, roller skating, or chasing the Muse, Christy writes historical novels (The Queen's Pawn and To Be Queen) from her home in North Carolina. Please visit her at http://www.ChristyEnglish.com
Posted by Jo Ann Butler at 7:49 AM 2 comments: