Off With His Head!

This tale was originally posted on Andrea Zuvich's The 17th Century Lady. What has Joshua Tefft to do with 17th century ladies? He was the brother-in-law of George Gardner, the son of Herodias Long, my favorite Rhode Island resident in the 1600s.

Thank you to Andrea Zuvich for hosting me! My name is Jo Ann Butler, and I’m the author of Rebel Puritan and The Reputed Wife. I’m currently writing the final book in my Scandalous Life series, and it will include an event which threatened New England’s very survival – King Philip’s War.

In 1620, the Wampanoag Indians allowed the Pilgrims to to settle at Plymouth without molestation. The land had belonged to their rivals, the Massachusetts Indians, but that tribe had been nearly exterminated by a smallpox-like disease. The Wampanoags themselves were decimated by the same plague, so they were in no condition to drive away the English settlers. They figured, let the Englishmen live here and be our allies against other tribes, such as the powerful Narragansetts and Pequots to their west.


Fast forward seventeen years, and English settlements were multiplying across the Connecticut coast. The Pequot Indians clashed with those settlers over land and trade disputes. The Puritan colonies amassed an army, drove the Pequots to ground, and slaughtered them as they reduced the Indians’ refuge to ashes.

Remember ‘Off With His Head?’ As far as the Puritans were concerned, they ruled New England. Indians who took up arms were rebelling against their rightful leaders, and beheading was the English penalty for such treachery. Governor John Winthrop recorded in his journal, “The Indians about here sent in still many Pequots’ heads and hands from Long Island and other places.” Those Indians bringing in heads were no doubt rewarded with English goods, and across New England, severed Pequot hands were posted on meeting house doors as a warning to local tribes to keep the peace.

By the 1670s Englishmen had built a half-dozen large coastal cities, and their towns were spreading inland. Sometimes the Wampanoags and other tribes were compensated for losing their cornfields and access to game and fish; sometimes not. That game was growing scarce, as were the beaver the Indians once traded for English goods.

In summer 1675, friction between Native Americans and English settlers broke into war. King Philip, or Metacomet, as he was known among the Wampanoags, led several New England tribes in raids against outlying settlements.  It was an attempt to push settlers out of the Indians’ most-valued lands, but those Englishmen were more numerous, and better armed.

Hanging, beheading, and sometimes drawing and quartering, were special punishments dealt out for high treason – criminal disloyalty against the state. King Charles I was beheaded in 1649 for going to war against his own people.

New England’s Puritans regarded King Philip as a traitor for his leadership role in the 1675-76 Indian uprising. After Philip was shot in August, 1676, his body was quartered and sent as grisly trophies to New England capitals. King Philip’s skull topped a post at Plymouth’s fort for nearly three decades.

An Englishman shared King Philip’s fate. Joshua Tefft of Kingstown, Rhode Island was about 33 when he was executed on January 18, 1676. Joshua’s unfortunate demise is of particular interest to me because of his sister Tabitha. The young woman was married to George Gardner Jr., son of Herodias Long, the heroine of my  historical novels.
Some young men from Rhode Island’s powerful Narragansett tribe joined King Philip in rebellion, but the tribe stayed out of the fray. That ended in mid-December 1675. The Puritan colonies – Massachusetts, Plymouth, Connecticut, and New Haven – assembled an army to end what they perceived as a vast Narragansett threat. Rhode Island, where the Narragansetts lived, had an amicable relationship with the tribe, but that didn’t stop the Puritans. Their army crossed the border into Rhode Island, and massacred the Narragansetts in the Great Swamp Fight of December 19, 1675.

A few weeks later, a handful of starving Narragansetts were captured while stealing cattle in Wickford, R.I. Joshua Tefft was among them. He protested that he had been recently captured by the Narragansetts and forced to serve them. However, it was noted that Joshua was armed with a musket as an active participant in the cattle raid. Further testimony revealed that Joshua had dwelt with the Narragansetts for fourteen years. Other Indian captives said that he had helped the Narragansetts design their swamp fort, and Massachusetts soldiers said they saw the young man take an active role in the battle. As a final nail in Joshua’s coffin, he was declared a heathen who had rebelled against his Godly upbringing.

On January 18, 1676 Joshua was shot, his body hacked into quarters, and left unburied. No doubt this unfortunate episode had a traumatic effect on the Gardner family of Kingstown, R.I., who had already seen their homes destroyed in the Indian uprising. I will explore these tragic events in the final sequel to Rebel Puritan and The Reputed Wife.

While preparing this account, I wondered of other Americans had been executed for treason. Apparently there was only one. An entry in the Ancient Records of Virginia, Vol. 3 reads:

Petit treason occurs when a person commits criminal disloyalty against a superior – a wife kills her husband, a clergyman slays his superior, or a servant kills a master or mistress. The Virginia records do not elaborate about William Matthews’ act of treason, but Henry Booth does not appear in them after Matthews was sentenced. Apparently William Matthews killed his master, and was hanged and disemboweled as an object lesson to other rebellious servants.

Posted by Jo Ann Butler at 1:51 PM No comments:

The Reputed Wife is a BRAG Medallion Honoree! 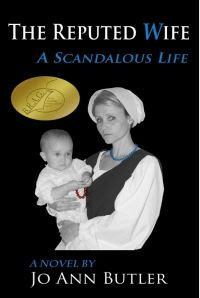 Recently I was delighted to learn that the IndieBRAG group has awarded their Medallion to The Reputed Wife.

My historical novel about Herodias Long has now joined Rebel Puritan as a BRAG winner! 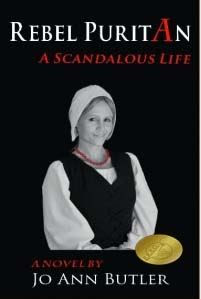 So, what's BRAG, and why should readers care about their Medallion?

In 2012, fifteen million books were published in the United States. No, that is not a misprint. That's 15,000,000 books published last year, most of them self-published.

How is a reader to find a really great book among those 15,000,000 works clamoring for attention? Big-time reviewers like the N.Y. Times will not review self-published books, so they can easily go unnoticed. Amazon and Goodreads reviews can be inflated.

BRAG is the Book Readers Appreciation Group, and their reviewers seek outstanding indie books produced by self-publishers. This group provides readers with "an independent, broad-based and reader-centric source" of reviews. If BRAG reviewers give a book their Medallion of approval, you can bet that it's a worthwhile read!

I couldn't be prouder that both of my books about Herodias Long have earned a BRAG Medallion, and I urge you to check out BRAG's website via the link below. You will find outstanding fiction for adults and children, non-fiction, and also my own Rebel Puritan and The Reputed Wife. Happy reading!