It's been a busy couple of months for me, between summer band concerts and writing the first chapters of the third book in my Herodias Long trilogy, The Golden Shore. I haven't found time for blogging, so please forgive me for reprising a blog I wrote for the wonderful writer, Ginger Myrick, a couple months ago at http://gingermyrick.com/ : 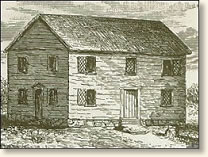 The time is the last Tuesday of June, 1655. The place is Newport, Rhode Island, a tiny town planted on land bought from the Wampanoag Indians only seventeen years before. If you are lucky enough to get a seat, you sit on a hard bench in Newport’s thatched meeting house, the largest building in town, as Rhode Island’s Court of Trials opens. Before you stands George Gardner, a sturdy farmer accused of adultery with John Hicks’ wife.

These are the facts, ma’am. The court record provides us with the charge, but it doesn’t tell the story behind the bare bones of accusation and verdict.

Thomas Painter, a newcomer to Newport, made the accusation against George Gardner, and it must have raised some eyebrows. George, John Hicks and Hicks’ wife Herod (short for Herodias) had all come to Newport when that town was first settled.

On December 3rd, 1643 Herod Hicks complained to Rhode Island’s governor that her husband, John Hicks was beating her. A few months later, Governor Coddington, fearing for the young woman’s life, legally separated her from John. Hicks removed to Long Island, taking their children and her inheritance with him. In December, 1644 he wrote to Rhode Island’s secretary, advising the authorities that he wanted no more to do with Herod because of “her whoredom.”

We don’t know if that accusation was made public, but everyone in Newport knew the Hickses’ sordid story. Herod was only thirteen when she married the man. John’s court appearances for abuse. The bruises Herod must have displayed before the governor separated them.

Despite Herod’s messy breakup, as far as Newport knew or cared, she had been quietly married to George Gardner since John Hicks’ departure. By 1655 the couple had five or six children, and their first son Benoni was born long enough after they had become a couple that there had been no accusations in court. George had done a good job as constable, and just been elected ensign in Newport’s militia.

We now know something of the accused, but who is the accuser? Who is Thomas Painter, and why did he make such a charge? By Rhode Island law, George Gardner could be put to death for adultery.

Thomas Painter was a newcomer to Rhode Island. He’d lived in Massachusetts for the last couple of decades, and Painter was an unsavory character as far as Puritan Massachusetts was concerned. He had moved from one town to another, and was probably urged along. He’d been given a scrap of land at Rowley in 1639 by Charlestown (perhaps to get rid of a deadbeat). In 1640 Painter’s family received charitable alms from Hingham.

Painter was still in Hingham in 1644 when Massachusetts’ governor John Winthrop noted in his journal that Painter, “on the sudden turned Anabaptist, and having a child born, would not suffer it to be baptized, or let his wife to bring it to the ordnance of baptism.” Painter was hauled into court and for contempt in saying that Puritan baptism was anti-Christian, and for “bold and evil behavior both at home and in the court,” Painter was whipped.

So, where was Painter between 1650 when he had a home near the wharves in Charleston, MA, and 1655 when he made his accusation against George Gardner? Perhaps he was in Newport for a couple of years, because he had been accepted as a freeman by May 1655. However, unlike the rest of Newport, it seems that Painter thought that Herod Gardner was still married to John Hicks until recently.

Actually, under Dutch law, John Hicks was still married to Herod until June 1st, 1655, a few weeks before George Gardner stood in court to answer Painter’s charge against him. On that date John was granted a divorce in Flushing, New Amsterdam. He testified that he wanted to wed again, and that his first wife had run off with another man. John said plaintively that he had given her no reason to do so, conveniently forgetting his abuse of Herod. He was granted that divorce by Pieter Stuyvesant on June 1st, but probably the divorce had been in the works for quite some time.

So, did Thomas Painter know that Herod Gardner had recently been divorced from John Hicks in New Amsterdam, and believe that the Gardners had been living in sin for years? Did he have evil on his mind, perhaps blackmail? Of course, chortles my novelist’s soul. Painter’s accusation and George Gardner’s trial are featured in my latest historical novel, The Reputed Wife, sequel to Rebel Puritan. Readers will also learn that George and Herod were keeping another secret about their marriage, but that is another tale …

Rhode Island and New York’s colonial records inform us that George Gardner had nothing to fear because no less than a former Rhode Island governor could testify on the Gardners’ behalf. William Coddington may have been weakened by his failed attempt to secure Rhode Island as his possession for life, but could still testify to their separation. Yet another tale …
Posted by Jo Ann Butler at 9:58 AM No comments: