My Favorite Character, Time and Place, and Tea or Coffee? 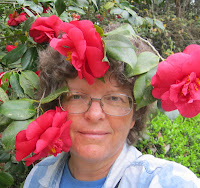 On January 3, 2013 I appeared in a Pittsburgh Examiner interview by Kayla Posney.  Thanks, Kayla!

Jo Ann Butler, author of "Rebel Puritan" answers 10 questions about her favorite time period in history, her favorite figures from history, and the age old question of coffee or tea.

1. If you could go back in time and be any figure from history, who would it be?
I’m not the first historical fiction author to say that I want to be my character, Herodias (Long) Hicks Gardner Porter in 17th century Newport, Rhode Island. Not only would I learn who she really was, I would be my own 8th-great grandmother.

2. What year in history would you have liked to live in?
1622 as part of the migration from England to Plymouth, Massachusetts. The Mayflower crossing two years before was extremely difficult for all involved. Disease, exposure, and starvation killed half of the Mayflower’s passengers and crew within 6 months of their landing. By 1622 the colony had stabilized, wives and young children were coming over, and being part of that new beginning would have been very exciting.

3. You're having a dinner party and you can invite 5 people from history, who would they be?
I’m going back to my “Rebel Puritan” protagonist. I’ll invite Herodias Long and her three husbands, though I’d better seat two of them at opposite ends of the table. Her first husband, John Hicks was abusive and abandoned her. He accused the second, George Gardner, of stealing her away, though it seems that she shouldn’t have had a difficult choice to make. The third, John Porter, was one of Rhode Island’s more affluent denizens, and would be an interesting dinner companion. My final guest is Benjamin Franklin because I love him!

4. What castle from the past or present would you like to live in?
Here’s one you probably haven’t heard of: Smith’s Castle, on the western shore of Rhode Island’s Narragansett Bay. Richard Smith used his home as a trading post with the Narragansett Indians in the 17th century. I’ve studied that period as an archeologist and genealogist, and wrote about it in “Rebel Puritan.” I would love to experience it, but I’m taking comfortable shoes.

5. Two fellow historical fiction authors you'd like to go on a history themed tour of the world with?
Ginger Myrick and Christy English. We write in different periods, but our central themes are how strong-willed women make their own way in a man’s world. And we all love Mel Brooks and Monty Python, so we’ll have a blast!

6. Who was more dashing and interesting, King Henry VIII of England or King Louis XIV of France?
Henry VIII for his messy marital life. Louis had his many dalliances and a pair of wives, but Henry never fails to fascinate. Would I dare to swap marital vows with Henry? That’s a tricky and potentially fatal proposition, but how could I pass up the opportunity?

7. Which of the six wives of King Henry VIII is your favorite?
Anne Boleyn as a spirited and independent woman, though the qualities contributed to her downfall.

9. What three novels could you read over and over?
"To Kill A Mockingbird", "The Lord of the Rings" trilogy, and "Gone With the Wind".

10. Tea or coffee when writing?
Tea by the gallon, hot or cold, green or black, I love them all!

Link to original article:
http://www.examiner.com/article/10-questions-with-historical-fiction-author-jo-ann-butler?cid=rss
Posted by Jo Ann Butler at 9:57 AM 1 comment: