Why Herodias Long?
By Jo Ann Butler
Author of REBEL PURITAN and
THE REPUTED WIFE

I bear genes from Herodias Long and George Gardner passed from son to grandson, down to my maternal Grandma Gardner.  My genealogy research commenced with Grandma in 1978, and quickly led me to The Gardiners of Narragansett by Caroline Robinson.  There I found the George and Herodias as 1630s immigrants from England, but Herodias and her stormy life occupied far more space in the pages than George’s did.

Herodias and her first husband followed religious exiles from Massachusetts to Newport, Rhode Island.  She was married at the age of thirteen, but otherwise Herodias lived a modern life.  Unless they came from a powerful family, 17th-century wives were little more than the property of their husbands, and it was extremely rare for a woman to be granted a divorce unless she was abandoned.

However, Herodias was not afraid to pursue what she needed.  She petitioned for two divorces and was legally parted from both husbands after they proved unsuitable.  She acquired her own land (most female landowners were widows), and retained custody of some of her children.

I admire Herodias for her boldness and persistence, but particularly honor her for an act which does not appear in Rebel Puritan, the 2011 historical novel I wrote about her.  This incredible act of bravery is featured in my sequel, The Reputed Wife, which will be published in autumn, 2012.

Missionaries from England’s Society of Friends first appeared in Boston in 1656, determined to bring their renewed faith to New England’s Puritans.  They were jailed, but when that did not discourage their acts of civil disobedience, both men and women were whipped with increasing savagery.

Herodias met the Friends – often called Quakers – through Mary Dyer, a Newport resident who had become a Quaker convert in England.  Though she may not have been a convert, Herodias walked fifty miles from Newport to Weymouth, Massachusetts to protest against the brutality, carrying a nursing infant in her arms.

She had seen the wounds borne by Quakers whipped in Boston and New Haven.  She had met Humphrey Norton, whose hand was so deeply branded that he might never use it again.  She knew well that she might receive no mercy from Governor John Endecott and his Puritan magistrates and ministers.  And yet Herodias could not remain silent.

After speaking in Weymouth against the whippings, Herodias was arrested.  She and her maidservant were marched ten miles to Boston, where they were whipped on her naked backs in the street, then jailed for two weeks.

Herodias knew all of this could happen, and yet she spoke.  Some of her other acts scandalized her Rhode Island neighbors and her descendants, but for her courage I honor Herodias (Long) Hicks Gardner Porter.

My guest today is Christy K. Robinson, who is hard at work writing a novel about Mary Dyer.  Mistress Dyer is a well-known resident of Newport, Rhode Island, and is featured in my "Rebel Puritan."  I asked Christy what attracted her to Mary, and she can tell you in her own words:
Why Mary Barrett Dyer?


Historical fiction has been my favorite literary genre since I was a young girl. I’ve learned that several of my author friends read my favorite book series on the Childhoods of Famous Americans when we were kids, and it shaped our discovery of history and historical fiction by humanizing icons of history and making them accessible to children. It tickled our imaginations to learn about culture and what life might have been like for Virginia Dare, Martha Washington, or Abigail Adams, as children. (There were boys in the series, too, of course.)

My mother was chronically ill, and she drafted me to help her at genealogy and history archives with the fetch-and-carry jobs, or searching the reference files (you know, the little card drawers at the book place, that preceded the search engine). We traced many of our lines back through renaissance and medieval eras to European royalty. One of our most important discoveries in the 1970s was the confirmation that we were 11 and 12 generations descended from Mary Barrett Dyer, the 17th-century Quaker martyr. In the 1970s and 80s, we believed that Mary was hanged by those mean Boston Puritans for her religious beliefs, “simply for being a Quaker.” Unfortunately, that belief persists in countless web pages today.

Mary Dyer had several opportunities to avoid prison and execution. She could have lived her life in peace and safety, doing anything she wanted to, in Rhode Island, the colony she co-founded. But she intentionally returned to Boston several times to defy her banishment-on-pain-of-death sentence, until she forced their hand and they executed her. It’s not that she wanted to die, but that she was willing to die to shock the citizens into stopping their leaders from the vicious persecution of Quakers and Baptists. Whippings such as Herodias Gardner’s. Mary and other Quakers believed they were called by God to “try the bloody law,” the law that required torture, bankrupting fines, exile, and death for dissenters.

Mary’s sacrifice and civil disobedience worked. After her death in June 1660, a petition to King Charles II resulted in a cease-and-desist order to the Puritan theocracy in New England; and the king’s Rhode Island charter of 1662 (which replaced previous religiously-liberal charters) specifically granted liberty of conscience and separation of church and civil powers in Rhode Island Colony. One hundred thirty years later, the religious-freedom concept modeled by Rhode Island became part of America’s Bill of Rights to the Constitution.

Religious liberties (to practice religion or not without interference of the government) and those who would legislate their morality upon others still clash today, 350 years later. That’s one of the things that compels me to write of a strong-willed woman. Mary Dyer sacrificed her will and her life of ease and wealth, with husband, children, grandchildren, respect and influence for the good of hundreds of people in her own time, and untold hundreds of millions who came after her.

The genealogy hobby is inspiring, educational, and fun. I’m 32 generations down the tree from Eleanor of Aquitaine, Christy English’s muse. Eleanor’s son John was forced to agree to the Magna Carta, a charter of liberties which has been the model of constitutions around the world. On another line, I’m 12 generations down from Mary Barrett Dyer, whose sacrifice laid the groundwork for the human rights in the US Constitution. It’s fun to speculate what molecules of DNA have come down to me from those two, or from the thousands of other strong, resourceful, and intelligent women in the family pedigree. They’re the people whose actions and principles formed our society and culture today. They were not wimps. And neither are we.

Christy K. Robinson is an author and editor whose book "We Shall Be Changed" was published in hardcover in 2010. She's currently researching and writing a historical novel on Mary Barrett Dyer, 1611-1660.  You can reach Christy at http://christykrobinson.com/#
Christy also has an excellent blog about William and Mary (Barrett) Dyer at http://marybarrettdyer.blogspot.com and I urge you to check it out!
Posted by Jo Ann Butler at 12:15 PM 1 comment: 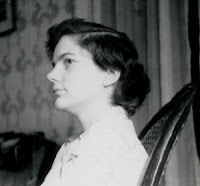 It’s been a while since I added to this blog.  I’ve been hard at work on preparing to publish The Reputed Wife, my sequel to Rebel Puritan, but other aspects of life have intruded as well.  My 81-year old mother went missing for 18 hours on a drive from southern Pennsylvania to upstate NY, and what should have been a 250-mile trip turned into nearly 700.  She is fine now, but after that scare, my family is assessing her abilities and needs.  One thing I can tell you – no more long-distance solo drives for her!

My mother is delightful and engaging, but anyone who has ever known her can attest that she is a strong-willed woman.  People have said that about me as well.  Is that why I was drawn to write about Herodias Long?

That 17th-century woman grabbed me with her thoroughly modern exploits the moment I read about them, and I am still in her thrall.  What is it about Herodias which attracts me so?  I questioned a pair of friends who are writing about their own strong-willed women, and their answers are similar to mine.

Christy English has written two books about Eleanor of Aquitaine; To Be Queen and The Queen’s Pawn.  Why Eleanor?  I’ll let Christy tell you herself:

Why Eleanor of Aquitaine?
By Christy English
Author of TO BE QUEEN

Why does Eleanor of Aquitaine enthrall me? This is a question with so many answers, that I’ll only talk about a few of them here. Eleanor amazed me with her power. In spite of the fact that she was born a woman during the high Middle Ages, she ruled the Aquitaine and Poitou in her own right, inheriting her property directly from her father. She managed to keep hold of her lands even after her marriage to her first husband, King Louis VII of France, was annulled.

Eleanor of Aquitaine was a powerful woman, but she was also a cultured one. She kept the art of courtly love flourishing both in England and in France, and carried it all the way to the gates of Byzantium when she rode in the Second Crusade. Eleanor was a woman who knew what she wanted. As soon as she freed herself from her first marriage, only two months later, she married Henry, the eighteen-year-old Duke of Normandy who within two years time was crowned King of England.

There are so many reasons to love Eleanor. My favorite reason is that she never gave up. No matter what obstacle rose in her path, she did not relinquish her goals. She simply waited and bided her time until she could bring her dreams to fruition. Not every task she set herself was accomplished, but most of them were. That determination, more than her lands and her titles, made Eleanor of Aquitaine a woman to be reckoned with.

Posted by Jo Ann Butler at 9:49 AM No comments: